'there are children here somewhere, I can smell them'

'A voice was heard in Ramah, wailing and loud lamentation,
Rachel weeping for her children;
she refused to be consoled, for they are no more.' Mt 2:18

The Sunday immediately following Christmas is, if following the Revised Common Lectionary at least, a somewhat delicate and tricky matter.  Unless opting for a service of Lessons and Carols [good call for the exhausted preacher - and what we did at Parish by the Sea] we move from the hope of the Christ child to the horror of Holy Innocents.  It's a time when we remember Herod's decree to slaughter all male children under two years of age; this upon hearing of the birth of a new King of the Jews.

I got to wondering about this particular 'terrible text' of the bible after reading a statement by a friend on facebook about the Feast of the Holy Innocents. Quite frankly, I really struggled with the content - or, perhaps, more correctly, where that content took me in my own thoughts through no actual fault of my friend.  Perhaps, given the subject matter, struggle is the only appropriate response.  The trigger prompting my move beyond what friend has posted was something along the lines of remembering 'all such children for whom their Creator was jealous, who are now at home with Him...'

Initially, it was the word 'jealous'; an odd word to use and yet utterly Old Testament biblical.  But it set me off thinking about responses by people in cases where a child, or children, die; of comments made to help console friends or strangers in their grief:

or the dire poem that contains the following:
'Perhaps God tires of calling the aged to his fold,
So he picks a rosebud, before it can grow old.
God knows how much we need them, and so he takes but few
To make the land of Heaven more beautiful to view.'
etc. etc. etc. 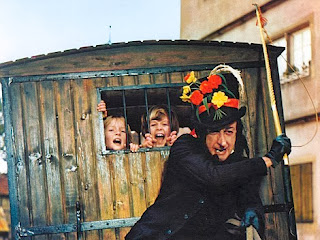 Beyond a theology concerning angels - angelology, if you will - and of what Christians believe happens when they die, which is not to be transformed into an angel but rather, the resurrection of the body [we don't change species / I'm thinking here of the Apostles Creed], I wonder at this understanding of a God who is not unlike a divine version of the Child Catcher from Chitty Chitty Bang Bang: 'there are children here somewhere, I can smell them.'

How do we balance theological understandings concerning our image of God and our beliefs around what happens when we die with providing a helpful and appropriate pastoral response to those who are in the midst of grieving the loss of a child?  Personally, God walking with folk in the place of pain is more comfort to me than the thought that God decided he needed another wee soul in heaven to brighten it up [what kind of cruel and capricious God does that?]...some folk, on the other hand, apparently derive comfort from this [here perhaps seeing God's particular care and a way to make meaning out of death].  How best to minister to folk who hold a viewpoint that may be very much at odds with one's own?  Lots to chew on - this is only the beginning of a conversation.  I think I wanted to post while it was still fresh!
Posted by Nik at 23:15 6 comments:
Labels: bible GOSPELS, bible OT, church year - advent christmas epiphany, lectionary leanings, theological/philsophical misc

A prayer: For those who are not busy, but wish they were 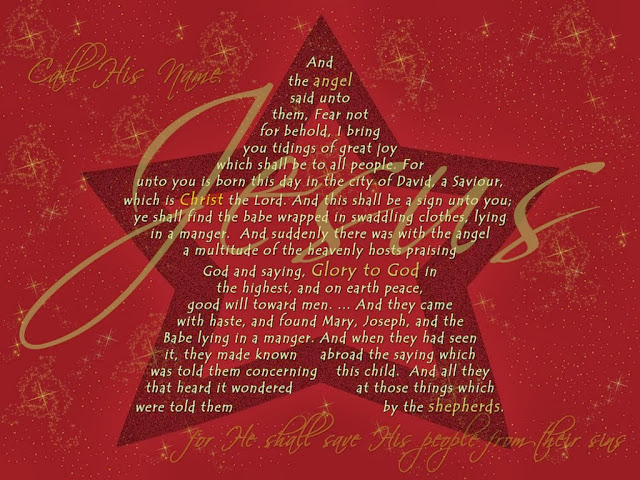 There are so many posts, as is totally right and as should be at this time of year for many, about stress and busyness and the near-meltdown that the run-up to Christmas can bring.  Not all are caught up in the maelstrom and the seeming madness, however.  Sometimes it feels that there is an enforced conspiracy of silence - of nodding politely at others' comments about how busy they are, how many will come, what preparations are left to provide the 'perfect' day...letting them talk and fobbing off 'what are you doing?'
In the midst of it all, in visits with those who are grieving, and those who are dying, those who are single, and those who have no family... a prayer:

For those who are not busy, but wish they were;
For those who wish they had someone to buy and wrap presents for, but do not;
For those who miss the hospitality of preparing a banquet for others to share;
For those who feel sidelined by this coming Christmas Day
as they hear the ceaseless message: 'it's all about the children'...
Remind us:
Lord, in the quiet spaces you are everpresent;
Lord, in the lonely places, you are our gift and our comfort;
That it is you, Lord, who prepares a banquet where all can share.
And on this coming day, in both busyness and quiet,
remind us once more:
It is all about the Child -
Immanuel - God with us.
Amen.
Posted by Nik at 14:35 1 comment:
Labels: #amwriting, church year - advent christmas epiphany

I awoke this morning, having subconsciously processed the gospel texts for both last and this coming Sunday into the beginnings of a most annoying ear-worm.
Sunday will be Advent 3, and the gospel text will feature our fierce friend Johnny the Baptist.
But wait.  Didn't we have him last week?
Well yes.
Think of this week's gospel text as the sequel - John in prison going 'ahhh, hang on...'
Given I'm preaching this week, it's clear the boy has been on my mind.
Oh, yes, the ear-worm:
think of the tune to 'The Addams Family' ...
fingers clicking?
Then I'll begin.

He's scary and he's hairy,
The second cuz of Mary...
and there it stayed, until I noted said ear-worm on the RevGals facebook page.
In a glorious sisterly collaboration with Cindi, Martha, Annabel, and a cast of others interjecting with amusing and bemused comments... herewith 'The Addams Advent 3' [well mostly 2, but who's counting?]

He's scary and he's hairy,
The second cuz of Mary,
He's not too fond of dairy -
Our beloved Johnny B...

He doesn't have much money:
He's eating bugs and honey
He probably smells funny -
Our beloved Johnny B...

He's into independence
He's calling for repentance
I can't write one more sentence...
On beloved Johnny B...

The Pharisees will go up,
The Sadducees will show up,
And at them he'll blow up -
Our beloved Johnny B...

The vipers are so creepy
They always make me weepy:
They scare me in my sleepy
When preached by Johnny B...

Our Johnny, getting hyper
cries 'Repent, you brood of vipers!'
The Pharisees need diapers -
He's quite scary, Johnny B.

When Jesus wants a dippin'
John B's wig will be a'flippin'
But J-man comes out drippin'
Bedunked by Johnny B...

Much later in his story
It's gonna get quite gory
But Jesus' words assure him:
He's God's beloved Johnny B.

Salome shakes a titty
She really is quite pretty.
Alas, she shows no pity
For poor old Johnny B.

When Herod is rewedded
Herodias is bedded,
And John B is beheaded
And that's the end of Advent 3

So.
What, I think, is clear from all of this nonsense is that I am truly no longer bowed down by the thesis...
the jury is out as to whether this is a good, or a bad, thing.
Also, after a very mixed day of good, but shattering visiting, some holy humour was just the tonic I needed.
Posted by Nik at 23:23 1 comment:
Labels: bible GOSPELS, church year - advent christmas epiphany, church- community/ecumenism/emerging/online, humour, sermon

a prayer for Advent 2a: prophets' voices 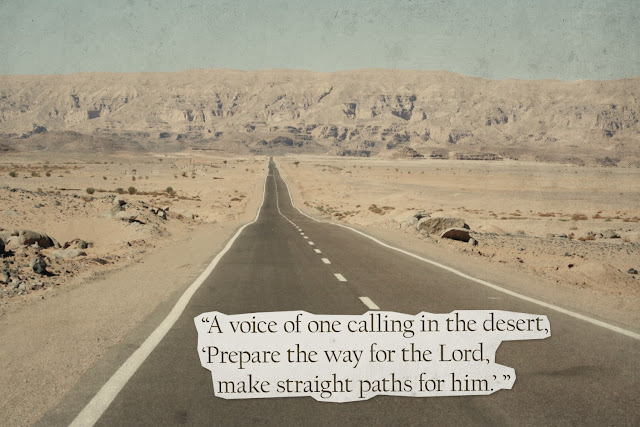 The voices of the prophets cry out:
‘Prepare!
Straighten the paths!
A new king shall arise!’

The voices of the prophets cry out:
‘Prepare!
Repent!
Be washed clean!
The king is coming:
Great and mighty is he.’
...  ... ...
In this Advent season of waiting and preparation
help us to straighten the paths of our lives:
when we have wandered from your path,
when we have meandered down myriad highways and byways
and every way but your way,
forgive us and draw us back to you.

When we have ignored the voices of your prophets
When we have filled our lives with so much noise and distraction that we cannot hear your voice,
Forgive us and draw us back to you.

When we have turned a blind eye to justice
When we have fanned the flames of conflict
When we have chosen in whatever way, to hurt or to harm
Forgive us and draw us back to you:

In a moment of quiet reflection, we bring before you those stumbling blocks we put on the path that hinder our preparations
as we await the coming of your Son, our King...
...   ...   ...
Sweep through the dark and dusty corners of our hearts,
Clear the corridors of our souls,
Cleanse us and cause us to rise up and rejoice;
To cry out with your prophets:
‘the King is coming:
Great and mighty is He!’