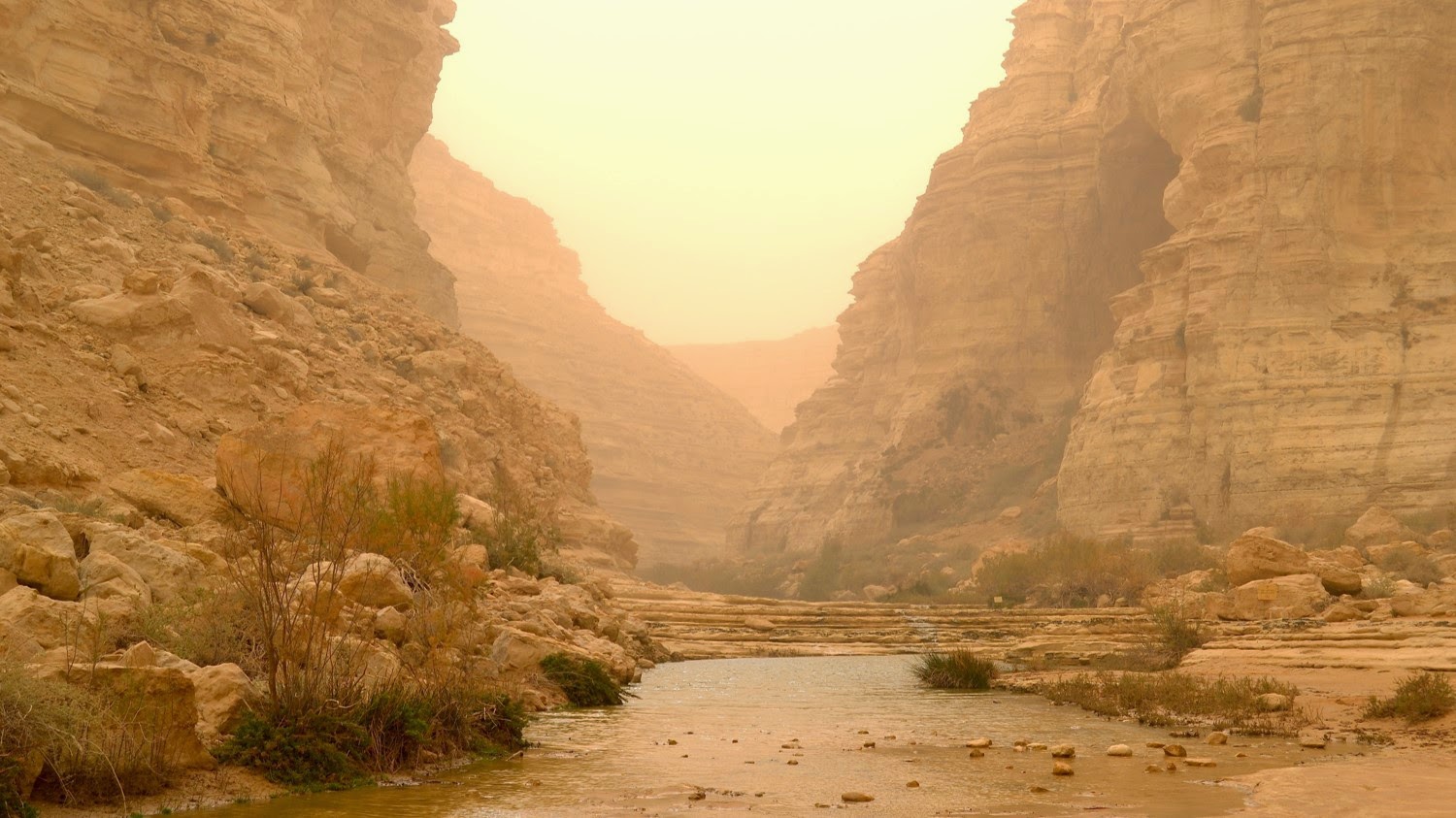 
There’s a very old story of a chap who joined a silent religious order...
After five years have passed, he’s called to the Abbot’s office.
‘How are you finding things, my son?’ asks the Abbot.
The monk considers for a moment, and being a man of few words, mutters:
‘Porridge is too salty.’
Another five years pass, and again he’s called in to see the Abbot.
‘How are you, my son?’ the Abbot asks.
‘Bed’s too hard,’ the monk grumbles.
Yet another five years pass and, you guessed it,
it’s his time to visit with the Abbot once more.
‘Well, my son, how are things?’
‘I’m leaving,’ the monk replies.
The Abbot sits and considers this news for a moment, and says:
‘Frankly, I’m not surprised: you’ve been complaining ever since you got here.’

In our Old Testament reading this morning,
we heard a story about complaining from the book of Exodus:
the Israelites journeyed at God’s command,
landing at  Rephidim, where they set up camp –
but there was no water for them to drink.
They complained to Moses and said,
"Give us water to drink."
To which Moses replied
"Why are you quarrelling with me?
And why do you test the Lord?"
But they ...continued to complain.
Wondering if they were going to stone him,
Moses cried out to God,
and was told to strike a rock with his staff.
And so he did:
water flowed from the rock,
and the people’s cries were answered...
and, demonstrating that there’s more to a
place-name than sometimes meets the eye,
Moses called the place
‘Massah’ and ‘Meribah’,
‘test’ and ‘quarrel’ –
neatly summing up the whole experience;
for the people had done just that, and asked:
‘is God with us, or not?’

Now, I confess, that if I was planning on going on a long journey
and was in the process of looking out for some travelling chums,
based on the apparent evidence found in the book of Exodus,
I’d have to say that,
the complaining children of Israel
would figure pretty low on my list...
...Actually, I suspect they wouldn’t be appearing at all!
This lot could seemingly win a gold medal for grumbling:
given that God had rescued them from oppression -
and rather dramatically at that, by raining down plague upon plague
on the Egyptians;
given that God went ahead of them in a pillar of cloud by day
and a pillar of fire by night;
given that God had led them safely across the Red Sea by parting the waters...
AND, given that God was providing food for them in the wilderness –
quail burger, anyone? -
given these very dramatic, very tangible proofs, how could they NOT see
that God was indeed with them?
It      was      plain    to see...
wasn’t it?

So why were they busily reinventing their recent history, turning what had
been slavery and oppression into some kind of ‘Disney-on-the-Nile’ theme
park?
...Perhaps, it was a coping mechanism.
Their lives overturned,
dramatically uprooted from all they’d known – even though it had been slavery –
journeying as strangers in a strange, forbidding landscape,
anxious in the present
and fearful for their future,
...they looked back
to a place where there was the comfort of home and familiarity of routine daily patterns.
Tho’ slaves, they knew what was what,
and what was required to get by.
And in the wilderness, everything –
every        single        thing –
was different:
all was change
a daily struggle for survival,
with the accompanying insecurities and fears of never quite knowing if they’d live or die;
never quite knowing what to expect.

Given the huge turnaround they’d experienced in their lives, maybe it isn’t actually that surprising
that they cried out, and asked
‘is God with us, or not?’
That question makes the story become
more human...
more real.

As often as I’ve read the stories of these wanderings in the wilderness,
with the occasional thought of
‘tch, what a bunch of whiners’ -
and I certainly have had those thoughts –
there’s also been the follow-up rueful realisation that perhaps
I’m not so different from these folk of so long ago...
and I wonder:
how many of us look back on our past
wearing those proverbial rose-tinted spectacles?
Ah, the ‘good old days!’
...However, we often leave out the reality of the hard slog of how things really were,
and of how much we actually grumbled as well.
Maybe grumbling is part of our human condition, and it continues to fascinate
me that the questions of people like the Israelites in the wilderness so long ago,
echo down through the ages,
to right where we are today
and that they remain so very relevant.

As with the Israelites, ‘is God with us, or not?’ is our very human attempt to
find meaning in a painful, lonely, and hurting world;
a world in which events can sometimes feel so random and meaningless...
a world in which we can feel lost in the wilderness;
our hope withered,
our souls parched and thirsting for meaning.

And, it’s a question that I believe is okay to ask:
sometimes we need to ask it,
just because being able to ask it,
able to voice the fear, the pain, the confusion
is...enough.
But sometimes, the question demands an answer:
one that avoids clichés, glibness, or glossing over...
and one that avoids trying to explain
everything – including God – tidily away into a box.
Because even in our very modern, very instant, ‘microwave’ society –
sometimes neatly packaged answers that we don’t have to think about too much ...
just don’t cut the mustard.
Which is just as well, because this whole ‘mystery of faith’ business is pretty untidy...
and God consistently refuses
to fit into the boxes we try to put him in.

‘Is God with us, or not?’
Yes.
God is.
We worship an ever-present God
A God, who, in Jesus, became one of us
and who sat at a well in the heat of the day,
and like his ancestors in the wilderness
and perhaps like his followers in the present,
found that he was thirsty,
...and asked for a drink...
but who also talked of living water that refreshed the soul.

Is God with us, or not?
Yes.
God is.
We worship an ever-present God.
Wherever we are – and even where we are not,
God is present:
in times of celebration
or sorrow,
in the midst of the mundane
or the terrifying,
in the fibre of our being
and in the very fabric of our world...
in Syria, Iraq, Afghanistan,
and in places of peace;
in the cockpit of a plane mysteriously disappeared
and alongside the waiting relatives of all those on board;
God is present:
in the corridors of power where the cats
just     keep     getting     fatter
and among those gathered at the food bank hungering for food and thirsting for justice,
desperate to survive.

‘Is God with us, or not?’
In the mystery of our faith
God is present
God is with us
and for us
in Spirit and in truth
rejoicing when we rejoice
weeping when we weep
grieving over the appalling things that humans do to each other,
comforting,
guiding,
cherishing us,
regardless of whether we feel it or not...
and sometimes the more pressing question is:
‘are we with God, or not?’

We may not have the dramatic signs that the Israelites had in the wilderness
but there are signs that God is with us,
if we stop and we look
and listen for them closely enough.
‘Is God with us, or not?’
Yes.
It can be seen in the way that we value each other in this community –
through myriad, tiny,
and sometimes near-invisible acts
of caring and kindness;
it can be heard underneath the banter during coffee, when a joke is shared,
but what is meant is ‘how are you really doing?’
It’s in the way we live our lives amongst our friends and our families,
our workmates, our neighbours...
being listening ears,
or a hand to hold,
a place of refreshing and hope in the lonely wilderness
that someone is feeling...
and that we may not even know about:
the important thing being, that we were, and are, there.
God is with us, as we drink in the life-giving, living waters of his love
and go and share that water with others.

Someone once said that
‘faith is the triumph of hope over experience.’
In faith,
we say ‘yes’ to God being with us –
even though we can’t neatly package the whole mystery of how and why.
Shortly, we’ll go out from here, into the rest of the week, touched by God
And, in turn, touching others –
being water-carriers into a parched and thirsting world.

‘Is God with us, or not?’
Within the very heart of the question,
within the mystery that surrounds us,
we worship a God who is with us
indeed, who is so much with us
he became one of us,
and who, even now, in this place,
invites us to drink deep
from the fountain of life-giving water
...and quench our thirst.

And so, may the God who is with us
bless us and keep us in his care
this day, and always,
Amen.
Posted by Nik at 20:35 1 comment:
Labels: church year - lent holyweek easter, sermon 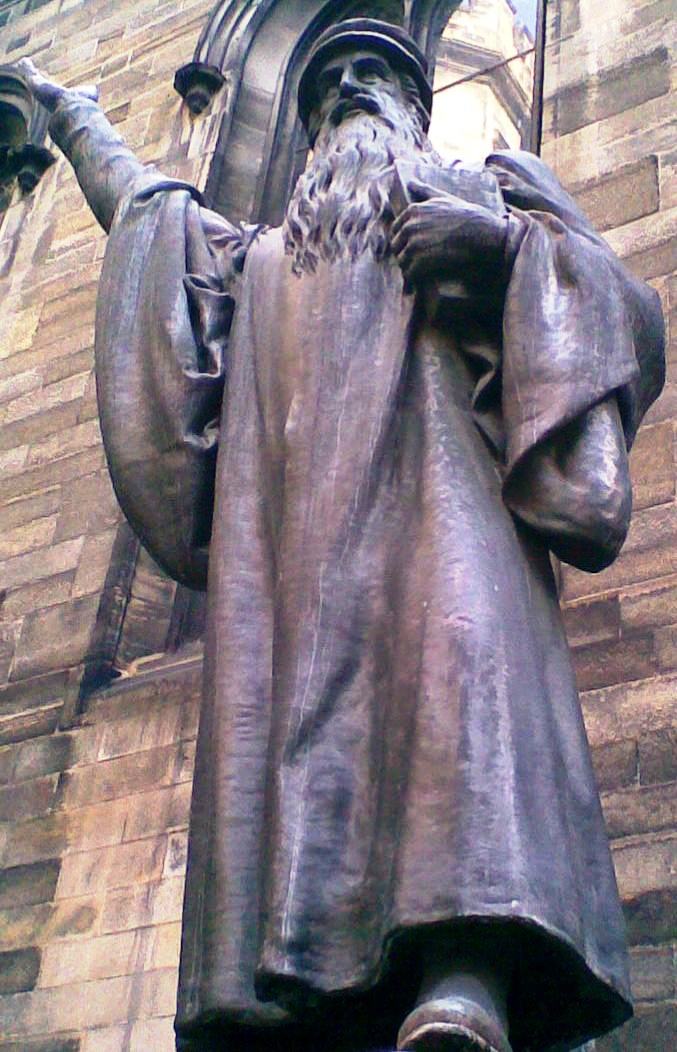 Beloved elect, predestined - albeit woefully tainted,
regarding this matter of 'Lent':
it behooves us to remember that we are surrounded on all sides by the adversaries of Satan.
Subtle, subtle are the machinations of his minions.
Flawed and unworthy creatures that we are, we listen to the honeyed words of temptation and fall, alas.
Swimming in a cesspit of sin with Satan, only God's grace can rescue us from uttermost darkness.

Fall on your knees and fall upon God's mercy: repent.
Fast and pray.
Think not of so-called special times and seasons of the year: begone foul lenten horror!  Instead, live your lives in perpetual penitence; don the black of sorrow and avoid riotous cheer, or indeed, purple.
Being a Protestant is a serious business.
We neither do purple nor shades of grey; black and white are sufficient unto the day. But given our inadequacies and sinfulness, mostly black will do.
Posted by Nik at 01:02 No comments:
Labels: church year - lent holyweek easter, knox
Newer Posts Older Posts Home
Subscribe to: Posts (Atom)