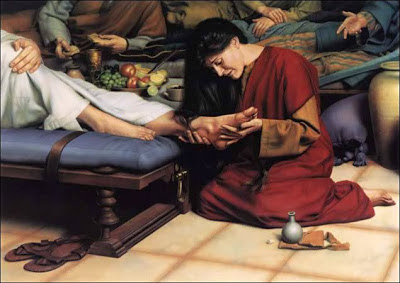 In that town, there was a woman who lived a sinful life...

Simon the Pharisee – in fact – everyone around that dining table including the woman herself knew that she was a sinner...
And everyone in that room
Simon,
his dining companions,
and possibly, even the woman herself,
if not physically pointing fingers of judgement, were certainly doing so in their heads:
from them – condemnation;
from her – self-flagellation.
She was tainted:
Polluted,
ritually unclean.
And anyone seen in her company was also tainted –
guilty by association.
At this private meal the local great and the good did not want this less-than-good outsider –
and her utterly extravagant display of public emotion –
did not want her anywhere near them, and she knew it.
And despite it, she burst through the closed door of judgement and exclusion and,
weeping,
found herself centre-stage:
on the floor
wiping Jesus’ feet with her hair,
touching him,
anointing his feet with oil...
tainting him ...
making him...
impure
while everyone else in that room looked on.

Given the way the story is presented, it’s as if a spotlight is shining on these two:
on Jesus and upon the woman ...
Which is why I find the question that Jesus asks Simon immediately
after the story of the forgiven debt
so very telling.
Turning from Simon to the weeping woman Jesus asks:
‘do you see this woman?’
He then continues by giving an account of her hospitality compared to Simon’s lack of hospitality... But wait a minute, let’s go back to that question:
‘do you see this woman?’
Why does Jesus ask this?
Given that she has burst in upon them and made everyone apart from Jesus
both outraged and excruciatingly uncomfortable
how could Simon not see her?
Or, another question:
What is it that Simon does see?
Here is a man who has lived by the laws of his religion:
He has made his life one of discipline
One of rigour
One of ritual purity –
He has tried all his life to live in obedience to God’s commands
To do the right thing.
He is not a bad man...
And yet, in this story, if this were an old cowboy movie,
Simon would definitely be wearing the black stetson:
Here, an apparently good man is portrayed in a very poor light
And it comes down to both what he does and does not see.
For him, the woman is a religious label:
A sinner
He is so busy placing her in his ideological box that all he sees is sin, not her.
She, as a human being, is almost irrelevant:
He is so caught up in the what
That he has lost the who
And by focusing solely upon the issue and not the human being,
Simon, ironically, is himself condemned.
But, in a double irony – if we judge him, do we fall into a similar difficulty I wonder?
After all, he is just human and thinks he’s doing the right thing.

Over the course of roughly 2 000 years of church history a consistent thread can be seen:
The tensions around law and judgement on one hand
and grace and forgiveness on the other
...as well as walking through the ethical maze of what it is to be pure or impure
and, indeed, who gets to decide such things.
And within this all, how this might impact upon our lives as we try to work out just what it means to be followers of Jesus?
While these tensions can be seen today in debates about sexuality for example,
this, to my own mind as an historian at least,
is just another in a long line of matters that have been argued over two millenia
regarding who is, or is not allowed in to the church...
And I suspect when we have finally come to a mind on the matter of sexuality,
that there will be something else or some other group that will crop up and continue these age-old tensions –
it was ever thus.

So, where does this leave us with our weeping woma?
With Simon and the other guests?
And with Jesus?
In our gospel passage, I wonder who it is we might identify with:
the woman?
Simon?
The watching, whispering group in the background?
Or perhaps, Jesus?
And, who we find ourselves identifying with in the story might change on any given day #
depending on our particular situation...
Regardless of where we put ourselves within the story,
I suspect that we’re not called to be a select group of the great and the good,
who try to ring-fence the church to preserve it and keep it pure from taint.
We can’t keep the church pure anyway:
it is made up of us – human and flawed
but also, forgiven, loved, and free
and, importantly, in whom Christ lives –
it’s no longer we that live, but Christ that lives in us –
and as Christ’s body in the world, we are meant to be in the world like God in Jesus was:
God – who loved the world, and the whole of humanity so much –
that he became one of us and got his hands dirty...
We, as his followers, are called to be risk-takers:
To open closed gates and doors –
Whether they be physical spaces
or voices of judgement and exclusion.

After Jesus had stated that the woman’s sins were forgiven, the watching, rather gobsmacked diners asked their own question:
‘Who is this Jesus?'
Simon, earlier, had wondered:
‘If this man were a prophet he would know who she is.’
And in fact he does:
She is a human being beloved by and forgiven by God.’ [1]

And so is Simon,
And the company of diners,
And, so are we.

Let’s pray:
Loving God In Jesus you showed the depth and breadth of your love for all people:
In the knowledge of so great a love and forgiveness
Teach us to love
Amen.