I sense a new direction to take when it comes to encouraging folk to get involved in church leadership/ or other offices within it... Perhaps we have been guilty of too much spin?  Or of over-accentuating the positive?  Or a little obsessed with 'fresh expressions' of church?

How about the following attempt:

Wondering what to do with your life?
Tried lots of things but not really managed to achieve much?
Are you a wee bit feeble?
Possibly stupid?
Vaguely spiritual?
A loser in love's cruel lottery?
Take heart! There is one more option you could explore!
In the comforting words of G. D. Henderson:
'if one were not strong enough in body or mind to become a satisfactory robber baron, or if one had a leaning to contemplation or sainthood, or if one had failed in the marriage market, then the Church offered its opportunities.' [G. D. Henderson, The Scottish Ruling Elder, p12]

Marvellous... although, personally, I quite fancy having a go at being a satisfactory robber baron :)
He does go on to discuss 'a remarkable cleavage in society'.  The mind boggles!!

Posted by Nik at 13:27 No comments:
Labels: church of scotland, church- community/ecumenism/emerging/online, humour

Providence, plague, and punishment in Perth, 1585 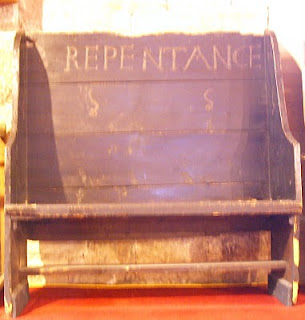 When it comes to the public performance of
penance and the punishments given to offenders in early modern Scotland, context matters...

Perth, in October 1585, was being ravaged by the plague.  Having a providential view of God, the kirk was keen to root out any behaviour that had obviously caused God's wrath to visit the town in the form of the 'pest'.  Further, to demonstrate their repentance to the watching God, the kirk session had called for the townsfolk to undertake an octave [8 days] of ritual fasting.

On the 'first Sonnday of the holie communion and of publict fast' an unfortunate and, alas, unmarried couple George Makchanse and Elspet Cudbert were caught in flagrante delicto; buck naked in bed together.
In reaction to the dire horrors being visited upon the town, the session took an exceptionally dim view, and a very severe line.  George and Elspet endured a most public performance of repentance for the 'sclander' they had caused, and for the potential peril that they had placed the town in.
The minute of the session record notes that on the Saturday following, they were to be 'cartit bakwart throuche the town from the said Elspet house quhair they war apprehendit, haiffand paper hattis on thair headis, ...and thairafter to be wardit til Sonnday at quhat tyme the officiaris sall convoy thame with thair paper hattis to the the [sic] publict seat of repentance, that thair they may confes thair offence and ask god and the cong[regation] forgifnes for the sclander thay gaif and evil exampil to utheris to commit the lyk.'
[Perth Kirk Session Minutes CH2/ 521/1 f.117 - or see the wonderful Margo Todd's newly printed transcription, p325]

Being carted backwards physically and visibly demonstrated that George and Elspet had morally gone the wrong way, further, the said cart was very probably the dung cart and as it passed through the town with the hapless couple on board the townsfolk would have not only flung insults upon them, but would also have made use of rotten eggs and veg., dung and dirt.  The cart, having begun its journey at the 'scene of the crime', as it were, was then driven around the town, the most likely route taking them around all the town gates.  This ensured that the whole town saw the couple's disgrace and was able to demonstrate its displeasure.
As to the paper hats... often in public rituals paper hats, or badges made of paper were worn on which had been written the offence.  This further compounded humiliation and, in effect, was a witness to show why repentance was required.

After the humiliation of being taken around the town and being on display to all their neighbours, the couple were required to spend the night warded - those guilty of sexual sins were held in the kirk tower, which was infested with vermin, and being 12 sq. foot, very cramped.
The next morning, George and Elspet were then required to be symbolically on display to God in the kirk in the midst of the community of the godly.  Here, at the stool of repentance, situated in the front of the church just by the pulpit - thus facing the congregation - the couple were to publicly confess their sin, and having done so, ask forgiveness of God and of the congregation.  This ritual, designed to restore divine and neighbourly relationship, had the added spur of desperately trying to avoid further visitations of God's wrath upon an already hard-pressed community.  George and Elspet were viewed to have put the lives of their neighbours into deathly danger.  It is this context that frames the severity of the punishment meted out to them.

As an aside: the couple had already been marginalised from the rest of the community.  Suspected of being infected with plague, they were both holed up in the lodgings used for those with plague, situated outside the town wall.  They seem not to have succumbed; George's name was brought up before the session twice in the following March for having failed to marry Elspet as promised.  Elspet is later mentioned in 1587, complaining that her husband spends more time with his friend than he does her - there's no indication that the husband is George, however.

From the autumn of 1584, plague had stalked the town mercilessly, ultimately resulting in a loss of approximately a quarter of its population - 1 427 people. In the January 1585, the only recorded instance in Perth of a couple being executed for adultery is noted.  Accompanying plague, famine was rife from February 1585, and the town was in a desperate situation.  The session administered poor relief, organised a rationing system, and as the monies from the poor box depleted, took the expedient step of allowing first time fornicators to pay fines for 'pious uses' instead of appearing on the repentance stool.  Todd observes that:
'in the midst of a natural  disaster understood as divine judgement for the toleration of sin, the need of the community to identify and eliminate the source of plague overcame the commitment of the kirk to securing repentance, amendment of life, and re-integration of sinners into the community of the faithful.... Reformed discipline amidst the crisis of epidemic disease gave way to sheer terror and primitive recourse to scapegoats.'
[Todd, The Perth Kirk Session Books, 44-45]

As I sit plotting my Perth Kirk Session spreadsheet and classifying the session minutes, there are far more entries concerned with administration matters - election of elders; settling communion examinations and arranging the distribution of communion; and organising poor relief. Within the three years of August 1584-1587 that I'm currently examining, what does seem to feature rather prominently are entries noting various couples wanting their banns of marriage proclaimed - if I haven't miscounted, these account for 155 in total.  The session entries in which severe punishments feature, and this includes excommunication, are the exception and not the rule.  Overall, between 1577-1590, there are only 6 excommunications recorded, for example, giving the lie to a common misperception that all the kirk ever seemed to do was to chuck folk out - rather, it was a case of the kirk doing everything it could to try to keep folk in.
Context matters.
Posted by Nik at 15:56 1 comment:
Labels: academia, church history, church of scotland

Perp and Flick: when history and sermon collide 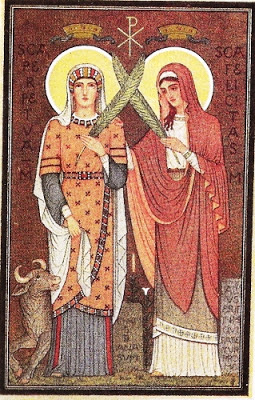 They kick off the start of the HCWR [History of Christianity as a World Religion] seminar series each year for 1st year undergraduates at New College.
Having been both a student and, latterly, a tutor of said course they have a special place in my heart; 'they' being Perpetua and Felicity and the story of their martyrdom in the arena at Carthage somewhere between 203-211 CE.
The first year I tutored this course, one of my lovely students presented her findings in the seminar complete with family holiday snaps - they'd been to the site of the martyrdom.  She also brought in some fantastic home baking - and yes, she got an 'A' :)  But I digress...

Why not go ahead and read The Passion of St. Perpetua, St. Felicitas, and their Companions?  Fascinating, disturbing, odd, and heroic in turns - what is rather fabby about it is that here is an early document that may have been actually written by a woman; highly unusual and for that fact alone - if we believe the claims of authorship - a must-read.

Having recently been listening to complaints re. the pointlessness of doing a degree in the pursuit of training for ministry, it delighted the cockles of my aged history-loving heart to read a sermon in which Perp and Flick feature.
So, with a shout-out to the wonderful Martha I link to the sermon for your edification and delight.

No, really, I am not doing any thesis-diverting, nope, not at all... plus, I have just written a paper for a conference next week... and I've done lots of work today, honest...
*wonders if this last smacks rather too much of desperate attempt at convincing self?*
Posted by Nik at 17:39 No comments:
Labels: academia, church history, sermon 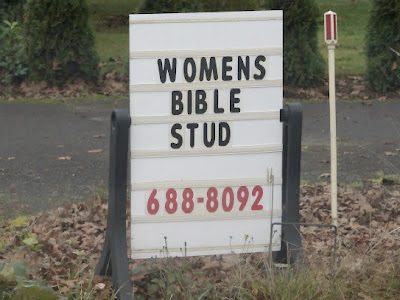 In these days of pews emptying at alarming rates, and numbers dwindling due to so many other more exciting options on offer, perhaps a different approach is called for to rekindle interest in the kirk.
Look no further...