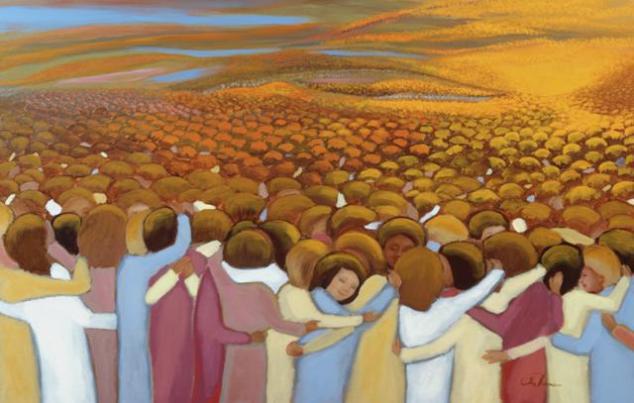 A sermon based on Hebrews 11:29-12:1-2
[part of a three sermon series]
not one of my better efforts but at this point, something is better than nothing..

As I was thinking about our text from the letter to the Hebrews which we heard earlier this morning, an old hymn decided to wander into my head –
and I’m not sure if it’s one that’s particularly well-known in Scotland, so bear with me if that’s the case...
It begins with these lines:
I sing a song of the saints of God,
Patient and brave and true,
Who toiled and fought and lived and died
For the Lord they loved and knew.


It’s a cracking hymn, and I'm more than a little vexed that it's not in CH4, but never mind.
A particular verse in the hymn has always made me stop and think, and occasionally made me scratch my head –
the lines in the verse tell us a little about some of these saints of God:
one was a soldier,
and one was a priest,
And one was slain by a fierce wild beast;
And there's not any reason, no, not the least,
Why I shouldn't be one too.
Now, I was never too sure *why* I should want to be a fierce wild beast, but never mind.

At any rate, this morning I find myself standing before you about to preach on that most un-Presbyterian of topics ‘saints’ – surely, Johnny Knox would be rolling in his grave underneath the car park behind St Giles Cathedral...
Against that is the thought that, every communion Sunday,
we say the Apostles Creed, in which we declare that we believe in
‘the communion of saints’,
So, given that, a sermon on saints it is.

Our verses from Hebrews this morning sounds like a roll call of the great and the good heroes of the faith – the saints of God, named and unnamed.
We start off with a list of named saints:
Moses – and the Israelites who followed God and who walked across the Red Sea as if on dry land;
The Israelites again, who, in faith, marched around the walls of Jericho and saw those walls come tumbling down...
The walls of the city in which contained Rahab, who through faith, had welcomed the Israelite spies...
an act which saved her life and which eventually saw her name appear as one of the ancestors of David and Jesus, in the genealogy you find at the beginning of the gospel of Matthew...

The list of faithful heroes continues, naming
Gideon, Barak,
Samson the strong and mighty,
Jepthah,
King David – beloved of God,
Samuel, and the prophets.
All apparently terrifically successful –
through faith, they fought whole countries and won.

And then we move to the exploits of some of the unnamed heroes of the faith:
some shut the mouths of lions
others put out fierce fires or escaped death by the sword.
God made them strong and gave them victory in battle...
And then there were women of such faith that dead relatives were raised back to life...
We read this list and it is easy to be impressed:
less ‘heroes’ of the faith, and more like ‘superheroes’.
These folk are winners in the race of faith...
it’s not hard to be inspired – they have the ‘wow’ factor.

But our writer to the Hebrews is not finished with us yet:
A bit like those old sales adds - you can almost hear him say:
‘but wait, there’s more’
And so there is.
But this list is rather different.
It’s a little edgier...
And quite a lot darker in tone:
We hear of those whose faith resulted in torture and death,
Of mocking, whipping, and being placed in chains and imprisoned.
Of being stoned, or sawn in half,
or, who, unlike our first list, did not manage to escape the sword.
And of those who survived who were so poor that they had only the skins of sheep or goats to wear, and who slept rough in caves or holes in the ground...
Unlike our first list of victorious heroes, this latter list is filled with folk who, in their own life-time did not necessarily see the obvious fruits of victory,
as they ran the race that had been set before them.
Here is a case in point of faith truly being “the assurance of things hoped for, the conviction of things not seen,” as we talked about last week.
It was faith that enabled these folk to hope for a better world,
a brighter future,
To hope that darkness would be swallowed up in victory –
even it they themselves might not be alive to see that victory.

What are we to make of these lists?
Of this great cloud of witnesses to the faith who, following in Jesus’ footsteps picked up the baton of faith and ran with determination the race that the writer to the Hebrews talks of?
We sit back and read of these saints of God, and of their adventures in the faith,
sometimes awed,
sometimes shocked,
and occasionally horrified...
and maybe somewhere deep down we perhaps think that it is all very well for them:
they were, after all, exceptional and extraordinary people.
Well, yes, but no.

I discovered another list – though not in the book of Hebrews:
a list that tells another side to some of the saints of God... these people who allowed themselves to be open to God and to be used by God to do mighty things.
Check this list out:
Noah got drunk
Abraham was too old
Sarah laughed at God’s plans
Isaac was a daydreamer
Jacob was a trickster
Joseph, well he was a show off in that fancy coat of his.
Moses stammered
Miriam gossiped
Gideon was insecure
Samson – let’s just say ‘my, my my, Delilah!’
Rahab was a prostitute
Ruth was a foreigner
David was an adulterer and murdered Bathsheba’s husband.
Isaiah...er, preached naked for three years
Jeremiah struggled with depression
Jonah ran from God...
and in the New Testament:
Zaccheus was too small
the woman at the well had had five husbands
Martha was a worrier
Mary Magdalene was demon-possessed
Peter denied Christ
the Disciples fell asleep while praying in the garden
Thomas doubted
Timothy was too young
Paul was too religious
Lazarus ...
Lazarus was dead!
These ‘superheroes’ of the faith... were everyday flawed and fallible human beings, who God called.
Now I want to show you a picture of some of the saints of God I know...
and you might know some of them too...
[turn on the live stream camera or have large mirror and a prepped person to use it - so congregation see themselves reflected]
There they are... look around...
Look at the saints of God.
You – yes you.

You are God’s fabulous and fallible and faithful saints
Called not to straighten your lives out before serving God...
but called as you are for who you are,
and with all the gifts you have been given by God, to use where you are.
And while you might not ever be called to wrestle with fierce wild beasts,
you are called to participate in the great race:
And it’s not about being the fastest man or woman alive, like Usain Bolt, nor is it about being the strongest, or the fittest individual...
This is a team effort.
It’s a great relay race that generation upon generation of Christians have been involved in –
whether they’ve run, skipped, jumped, walked, hobbled, limped, wheeled or dragged themselves, or propelled themselves forward through the sheer power of thought if they weren’t able to physically move...
All passing on the baton of faith to the next generation and keeping the flame of faith alive.
And here and now, we are that generation who are running the race, holding the baton;
everyday saints just getting on with life.
And if you sometimes don’t think you’re good enough,
or sometimes struggle to believe that God calls you to run so that the baton can be passed along for the next leg of the great relay race,
there’s quite a neat line from Oscar Wilde who observed that
‘every saint has a past, and every sinner has a future’.

The last verse in the hymn ‘I sing a song of the saints of God’ states:
They lived not only in ages past,
There are hundreds of thousands still.
The world is bright with the joyous saints
Who love to do Jesus' will.
You can meet them in school, or in lanes, or at sea,
In church, or in trains, or in shops, or at tea;
For the saints of God are just folk like me,
And I mean to be one too.

God doesn’t call superheroes – they don’t really exist except for in comic books.
God calls us:
Calls us, imperfect yet beloved, people to fix our eyes on Jesus,
the pioneer and perfector of our faith:
calls us to run the race.
And, as we do so, we are cheered on by that great cloud of witnesses who remind us that, as we run, we are not alone –
we run the race with everyday saints past and present and are a part of something so much bigger than we can possibly imagine...
but in faith we have hope:
hope for a brighter future -
We may or may not see that future, but we run the race knowing who holds the future in his hands.
And to God alone be all glory...

Let’s pray: God of all the nations, you rescued your people out of the Red Sea and delivered Rahab from battle; you rescue the lowly and needy from injustice and tribulation. Surround us with so great a cloud of witnesses that we may have faith to live by your word in our time, courage to persevere in the race set before us, and endurance in the time of trial. Amen
Posted by Nik at 18:04
Labels: bible NT non gosp, sermon

What an inspiring sermon! Thanks!

I do love this hymn. We sing it every All Saints' Day and I used it with a group of 8-11 year olds and added a final verse using all of their names in it. Kinda like your sermon! Which I love, by the way.