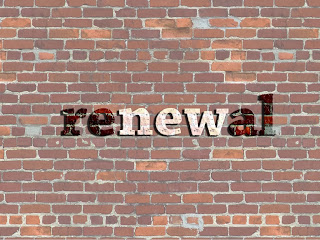 I have just been grinning at a friend's comment regarding her particular star word [waves to Mary Beth] and how she has been 'overthinking the hell out of' it.  Struck a major chord here as well: I have been quietly pondering and processing what to do with 'renewal' - but, then again, so has the Church for c.2 000 years so I'm not the only one to get into a fankle on this particular matter.

When Marci cast that star word loose across the 'interweb heavens, I confess that I sighed initially; my word didn't feel nearly so cool as 'imagination', or as inspiring as 'vision'...
My word felt like...hard work.
It felt like being bogged down.
It made me twitch and want to walk swiftly in another direction - any direction but starwards/words.
And so, I wondered 'why?'...and Mr Knox came, unbidden, to my mind.
'Perhaps this is thesis-associated,' he kindly offered.
'I suspect you're right, Johnny,' I replied.
'You know it makes sense, and also, you know I'm right - I always am.'
Although he's been dead for 442 years, over the years we've become comfortable - for the most part - in each other's company...

'Renewal' and 'reformation' are somewhat synonymous, and I've been wrestling with, and writing on, historical reformation[s] for the last 5 years.  Perhaps, then, this star word I have been gifted with is rather apt.  'Renewal' brings with it a sense of freshening up something, shaking out the dust, brushing off the cobwebs, and making a thing all shiny and new again - or as much as one can without it being a completely different entity.  'Reformation' suggests how a thing is shaped, or rather, re-shaped.  This raises the question: does the reshaping turn the thing at hand into a completely different object, or is it, although changed in the way it is formed, still the same in essence?

What I have learned about attempts at both renewal and reformation is that both require looking back in order to move forward.  The multitudinous reformations of the church over the ages - because there was more than just one that occurred in the 16th century - have always sought to recapture a sense of the energy and urgency, and perhaps the lack of institutional complexity, that seem to permeate the church in the age of the Apostles.  Here was a time in which things were shiny and new, where there was not as yet a particular, fixed shape.  On the other hand, this did not mean that new and unshaped meant without any sense of order, as the Epistles testify: even then, trying to make sense of how this new thing might work was important.

Over 2 000 years later, how do we as Christians make sense of this thing called 'church'?  And, if we are to renew and reform it [ecclesia reformata, semper reformanda - the church reformed and always being reformed], we need to know just what 'church' is.
It's not buildings.
It's people.
As the old song asserts, 'I am the church, you are the church, we are the church together.'
The church is organic: flesh and blood and bone.
It is also communal; not just 'me and my God, but we and our God'.
How do we pare away the accretions that slow us down, or distract us from living as Christ's body here on earth?  What are these accretions?
They are different for each of us...
Looking back, to look forward, what have we in common with those in the church of the Apostolic era?
It's not buildings.
It's Jesus.
The One who calls us 'friends'.
The One who calls us 'brother' or 'sister'.
The One who calls us into a new relationship with him and who widens our understanding of 'family' to include all both now and throughout the preceding centuries - that great cloud of witnesses.

Perhaps each generation has to do a little spring cleaning, some freshening up of its own understanding of what 'church' is, to find anew that energy and buzz of the church in the Apostolic era.  Perhaps too, each generation has the task of making shapes - re-forming and restructuring and re-contextualising what it is to be church.  Although the shape may look and feel different, it is still the same in essence because, being organic, the church carries the spiritual DNA of Jesus, who is flesh of our flesh and bone of our bone.

The work of renewal and reformation is hard work very possibly because it is borne out of a relational context - with God, and with one another - and the question that resounds through the ages is: how can we be church without actually killing each other?
In the end, does renewal and reformation - whether individually or communally - simply boil down to learning and relearning, and relearning once more how to love God, and to love your neighbour as yourself?
Posted by Nik at 00:05 No comments:
Labels: church history, church- community/ecumenism/emerging/online, knox, revgal, starword 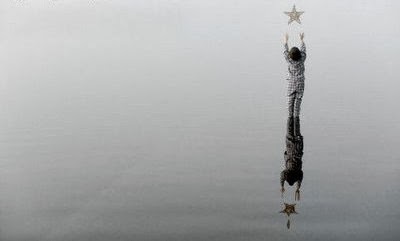 This morning in worship we reflected upon journeys, star-followers, and paying homage to the Child in the manger; Parish by the Sea paused to consider Epiphany.  Beyond being the last chance saloon for getting in a few more carols before we pack them away for another year, Epiphany itself offers the opportunity for wondering and wandering at the beginnings of a new year: wondering at the incomprehensible thought of God revealing Godself in flesh and blood and bone; and in response, wandering where the Star-child might lead us.
Where will our wonderings and wanderings take us this year?
That's an unfolding revelation.
Perhaps to assist both, some form of intentionality might be useful?
Well, it might for me, at least.

Over at the fabulous blog Glass Overflowing, Marci has been handing out star words to her congregation [and anyone who asks her nicely!] as tools for reflection to be used across the year.  Given my own reflections have been somewhat undisciplined and haphazard of late, I decided to opt in - after all, it would not do to have written a thesis on discipline and not pay any attention to the matter.
And my word?  'renewal'

Given the potential for certain life changes come the end of September, what might need taken out and looked at in the revealing light of day...what might need new life breathed into it...?
Let's see where the Star-child beckons, and how the star word might prompt new green shoots.
Happy 're'new year.
Posted by Nik at 00:14 No comments:
Labels: church year - advent christmas epiphany, prayer/spirituality/journey, starword
Newer Posts Older Posts Home
Subscribe to: Posts (Atom)