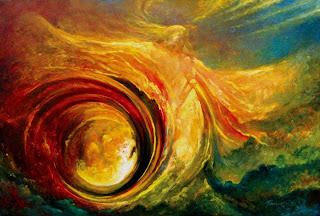 Ahhh, RevGals Friday Five... I have not played for a looooong time... so, here goes:

1. What has encouraged you?
Hmmm, I confess I was rather gobsmacked by a profusion of gracious words from someone the other night at our RevGals W.E.E. 1 gathering.  I can't quite recall correctly, but in amongst some incredibly lovely encouraging stuff, said person finished with 'You rock.  Thank you for letting me dance amongst the constellation of all your friends'.  What a lovely image... and what a lovely way of reminding me of just how incredibly fortunate I am with those folk who I am privileged to call friends.

2. What has inspired you?
Our General Assembly, which came to a close this afternoon after a week of merry meetings in New College.  The Moderator had a lightness of touch, a sense of fun, and the overall atmosphere was gentler than it has been for a while: folks quietly got on and did the business of the church cheerfully.  It is already being called the 'alleluia' Assembly.  What inspired me...was that this Assembly reminded me that we can come together as a church and be united in a common cause...


3. What has challenged you?
I am pondering words, and especially the power of words.  I am challenging myself to be more gracious in the way I engage with folk - it is too easy to be critical or cynical or even self-aggrandise at the expense of others.  So, positive, gracious words: to make more use of them please!!!

4. What has made you smile?
The sun!!!! It has clawed its way out from behind the dreich and has been warming me right through to the bones this week - happiness.  Our RevGals gathering on Wednesday brought lots of laughter and smiles.  Catching up with old pals who were gathered for the General Assembly: lots of cups of tea and happy blethers.  Hugs - lots of them - always a guaranteed smile-bringer :D

5. What has brought a lump to your throat or a tear to you eye in a good way?
Big deep conversation with a pal very early on in the week.  Again, a reminder of how blessed I am with very, very good friends.
Posted by Nik at 21:41 2 comments:
Labels: church of scotland, praise/confession/thanks, revgal 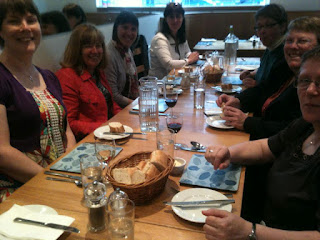 Over the years, I have lurked, and latterly been a part of a wonderful, nourishing, and really rather fabulous online community of women [and friends of women] involved in ministry called revgalblogpals. Every year, for the last five now, the RevGals have organised an event known as B.E. [insert number of year here!] A Big Event, generally on a cruise ship, generally with a guest speaker/ facilitator: a mix of study trip, fun, community, building up of friendships.  Alas, I have never been to one - they look fantastic - but there is a growing contingent of women based in Scotland....  Knowing several Scottish-based RevGals might be at the General Assembly of the Church of Scotland this year, a small plan formed in my mind: why not try to organise a wee event... indeed, why not have W.E.E. 1?  Wee Event Ecosse 1, to be precise.  And so, sending out a call via the RevGal facebook page, we began to get ourselves organised.
Loved how one of our American RevGals came up with the restaurant we decided upon....
We Scottish-based RevGals and pals of RevGals duly convened at the Mussel Inn last night, for food, merriment, and more wine than is suggested by the pic above.  What followed was a gentle, funny, and really lovely evening meeting friends old and new, the having of some good blethers, laughter, shared stories - some good, some bad, one downright ugly - and overall just a super sense of mutual support and solidarity [if that is not too cheesy!].
Who knows... we may even organise ourselves and have another!!
W.E.E. 2 anyone?
Posted by Nik at 18:34 2 comments:
Labels: church- community/ecumenism/emerging/online, revgal

Colloquium: Women, Language, and Worship in the Church of Scotland

Am currently distracted from my thesis - again - due to helping organise a conference:
Colloquium: Women, Language, and Worship in the Church of Scotland.

Set for the afternoon of June 7, it is beginning to shape up well.
Some good folk presenting papers in the first half of the conference:
Anne Logan, Finlay Macdonald, and Elizabeth Ursic.
This followed by a break-out time for small group discussion, and then discussion by panellists representing different generations of women in ordained ministry in the Church of Scotland.

I've set up both facebook and blog pages - do go visit for further details.
And maybe see you at the conference :)

Posted by Nik at 16:51 No comments:
Labels: academia, ALL are welcome, church of scotland

Let's hear it for Desmond T 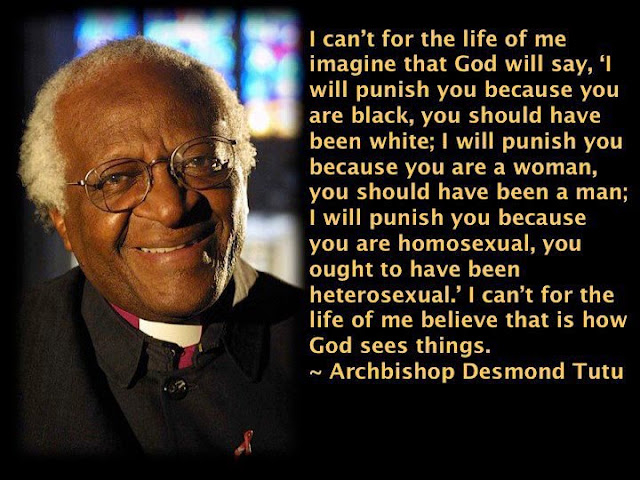 Yup, wot he said!!
Posted by Nik at 01:03 1 comment:
Labels: ALL are welcome, peace justice and politics

At some point mid-semester, possibly week 6 or 7, the fortnightly gathering of the 'Jane gang' aka Early Modern 'T' [aka those of us wot have Prof Jane as wise and illustrious supervisor] met.  Amongst other topics, the matter of getting organised and having some seminars was raised.  In one of those moments when you hear words coming out of your mouth while simultaneously hearing yourself inwardly shouting 'argh, shut up, just SHUT UP, argh', I heard myself making the suggestion of killing two birds with one stone and hosting a day conference for postgrads of the ecclesiastical history variety [the other bird being killed concerned an annual weekend residential conference for postgrads from the four ancient universities of Scotland, and held in Kinnoul.  This had had been running for years but had latterly quietly died... cue lots of conversations about different formats, how that might work, where, when, etc. but nothing that had quite managed to emerge].
The suggestion made, and taken up, a committee of four of us somehow put it all together, and on Tuesday 2nd 'The History of Christianity' conference was held at New College with a wide range of papers from patristics right through to the present, with said papers presented by postgrads not only from Scotland, but also from further afield.  A late withdrawal from a presenter on Thursday evening saw me taking a deep breath, consulting with supervisor, then hurriedly putting a paper together.  Not quite what I'd planned, as I had put myself down to be tea-lady and general dogsbody; rather a busy day.

We were really pleased with the response and there was a good positive vibe throughout the day.  The academics involved were pleased with it all and it looks like we may indeed have found a new way of providing what Kinnoul offered: - a friendly, non-threatening environment for postgrads to test their ideas amongst peers and with the encouragement of academics.
Looks like we may have brought about an annual conference.
Delighted with how well it was received.

One particularly nice cherry on top of the week was being introduced to Diarmaid MacCulloch at a 'do' held at the Royal Society of Edinburgh last night - this as an adjunct to the Gifford Lectures, at which DM is the guest speaker this year [link will take you to the filmed lectures].

Wild fortnight, and utterly shattered, but in a good way.  :D