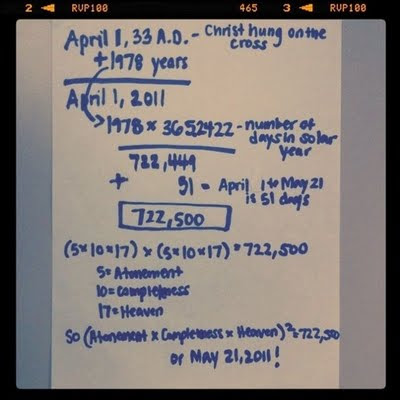 When I was preaching a couple of Advents ago, on some rather apocalyptic texts, the tune that seemed to be the accompanying soundtrack was REM's 'End of the world' - great song.

The mathematical equation to the left is apparently proof that tomorrow is the day - the beginning of the end - the Rapture... well, according to a chap called Harold Camping at any rate.
Now, I was always pretty useless at maths, and trying to understand the calculation convinced me once more that I truly am a better historian than mathematician.  Who'd'a'thunk, for example that the number 5 = Atonement, or 10 = completeness...? I'd been led to believe by reliable, numerically literate friends that completeness, or perfection, was represented by the number 7.  Never mind.

Anyhoo, given tomorrow's the end of the world as we know it, I'm wondering how I might prepare.  Apparently the event will occur around the globe at approximately 6pm local time - so I guess that takes out the Antipodes first....  I'm thinking an early trip to the shops to stock up on chocolate, then take the radio down to the beach and eat chocolate as I listen to the events unfolding.  It beats planning out another chapter of the thesis... :)

Ah, there might be a flaw in the plan: I've just noticed that the first set of figures in the equation is a date, and I'm wondering if there's some significance?  I hadn't realised Jesus had been crucified on April Fool's Day tho'... hmmm.
Kinda makes ya fink, don't it?

This post finishes with what I think should be the official track for tomorrow...
Fasten your seatbelts, and see y'all Sunday... although, you're welcome to throw a custard pie in my face if Mr Camping is actually correct - tho' he did seem to get the sums wrong in 1994....

[a return to more regular blogging, non-Rapture permitting, will recommence once I've finished off my current placement
and next instalment of thesis work]

Is that a Julian or Gregorian calander? He could be 11 days out.

Hoping the second coming is a Monday. Makes for a long weekend.

I hadn't seen the formula. Maths is a strongish point of mine and...well the figures do seem to add up. I just have no idea how he got them. I'm guessing, as it would have been 6pm in some parts of the world by now he might be wrong...just a guess.

Hi Mrs G - yeah, no news from the Antipodes re. strange happenings, disappearances and suchlike... :p