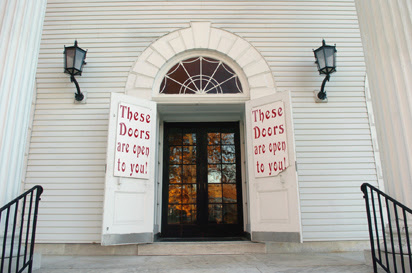 My blogging has been utterly lacking and I've been slacking...
So glad the RevGals are providing a little incentive to get some of us back to the blog-face once more.
And so, I offer the following reflection on Rosemary - who was there right at the beginning,
and who opened the door that would eventually set the whole ministry thing rolling.

I was, perhaps, 13.
To my surprise, my mother insisted I go to confirmation classes at the local Anglican church.
The surprise being that, as a family, we did not do church.
Nevertheless, for almost a year, I'd turn up to Father Smith's confirmation classes
on a Monday afternoon when school had finished.
As a relatively good child, I did find the lesson on going to confession a most puzzling one:
neither bank robbing or murder had, as yet, been committed;
what was there to confess?
Still, I made the most of these opportunities in class to try to ask the
annoying and difficult questions.
Poor man.  Yes, I was testing him.
I began to read up on the subject to see what googlies* I could throw at him.

On Sunday, I would head out to the 7.30am service with my slightly hung-over mother,
get the required dose of religion,
and then we'd all head to the beach.
[in the process, observing that communion wine + hangover = not very happy mix]
Even at that age, I remember noticing that, in worship, anyone who did anything was *not* a girl....
The spiritual stuff was interesting, but the visual message I picked up on was that I didn't belong.
After the year had come and gone, and with it, the confirmation, that was it:
church was now officially done 'n dusted.
Or so I thought.

Several years passed.
18, and  now done with school, I'd head off on a Wednesday evening
to the local Scottish Country Dancing classes.
It's where I met Rosemary.
Rosemary must have been in her late 50's by then -
which, to my 18 year old self, was akin to being positively ancient beyond words.
Light grey hair.
Curly.
She drank hot water with a teaspoon of vegemite: unusual.
She also went to church.
Not Anglican; Uniting Church in Australia.
Taking pity on a poor teen reliant on public transport,
she kindly offered to pick me up and drop me home from dancing.

In that car, we talked.
A lot.
I asked questions - so many questions.
She patiently fielded them.
Talked about faith.
Community.
Life, death, the universe.
'But aren't you committing intellectual suicide by being a Christian?'
Books in process of being devoured included Marx, and Sartre
The word 'deaconess' came up in conversation one evening.
Wait.
She didn't just *go* to church...she actually did stuff...and was paid?
Huh?
I visualised my year of confirmation...
Only men did stuff that went beyond being in the pews.
Apparently not.
I do remember sputtering and asking her:
'But, how, as a woman, can you collude with the patriarchy?'
Light reading material at this point consisted of de Beauvoir and someone called 'Greer'.
Graciousness and invitation:
'Why not come along and see?'
I was so intrigued, I did...
and watched, and listened, as a woman led worship and preached.
...oh.

I'm not quite sure what happened that day.
But somehow, somewhere, a door unlocked inside.
Permission.
Belonging.
Encouragement.
I went back the following week.
And the next.
And the one after that.
All it took was a patient, kindly, and very gracious woman
to show me that the door was open,
and that I was welcome.

So many years later, I have no idea where Rosemary is, or even
if she is still alive.
But soon, another door is about to open...
I've completed my training for ordination and am now
looking for a charge.  And so we come almost full circle.
Should I encounter some brash, precocious youngster with lots of
attitude and a myriad of questions, I pray for the same graciousness
and patience shown to my younger self.
Blessings on you, Rosemary.
Oh, and for the record, I still have not, as yet, robbed a bank or committed murder.

*googlie - for the non-cricketers... it's a cricketing term: a type of bowling delivery, which can be quite tricky for the batter.
Posted by Nik at 02:00
Labels: #amwriting, cloud of witnesses, revgal

Thanks for stopping by my blog. Also thanks for sharing your story!

Nik - what an amazing woman!
Thanks for sharing this chapter on your journey
J

love this Rosemary, and teenage you...and can't wait to see the amazingness that will be ordained you! :-)

Love the way you acknowledge faith coming full circle. Faith is often like that. I hold you in prayer as you wait.

How marvellous! and I love thinking of the folk to whom you are a Rosemary.

That's a great story! What a wonderful woman!