I am an immigrant

There's a campaign currently under way in the UK
which has caught my interest.
It's trying to drive a stake through the heart
of what feels like an ever-present policy of
targeting and blaming immigrants for the woes of this land.
I wanted to have a look at some of the ads,
and so, I typed 'immigration campaign ads'/ images
into a well-known search engine -
basically because I couldn't remember the name of the campaign.
I didn't quite find what I was looking for, initially.
What I did find, however, was rather
eye-popping. 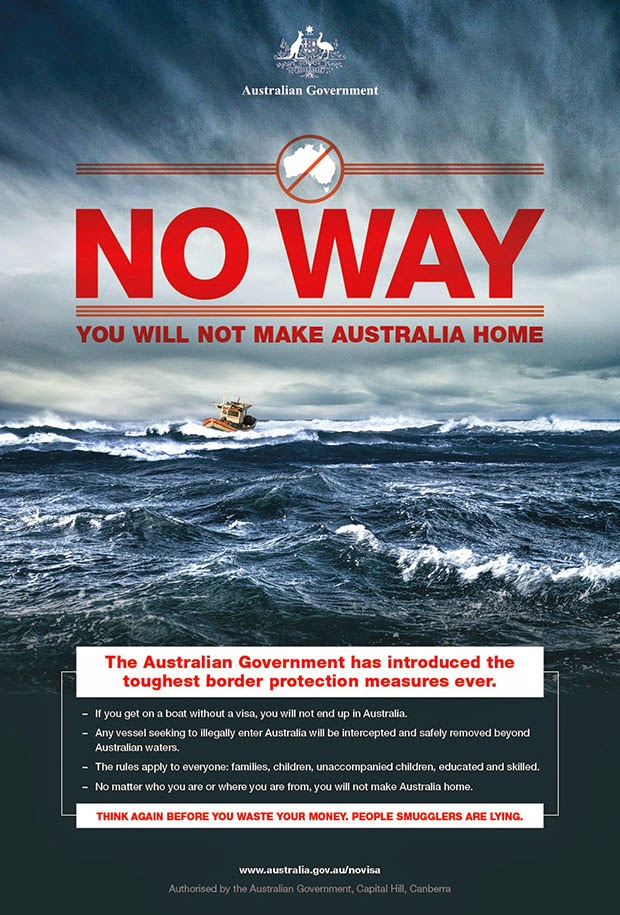 Wall to wall hate.
'Go home'
'No way'
'You can't stay here'
Several countries:
all pulling up the drawbridges,
filling the moats with sharks,
and putting archers along the walls.
Siege mentality.
Or, another analogy:
drawing the wagons into a circle,
countries turning in on themselves.
And, all the while, the stench
of political opportunism and cynicism
hanging heavy in the air.
Creating and encouraging a culture of fear
is an expedient way of manipulating
the erosion of civil liberties,
or basic human decency.
And, looking around at the images that appeared
on the search engine,
fear and near-panic seemed the order of the day. 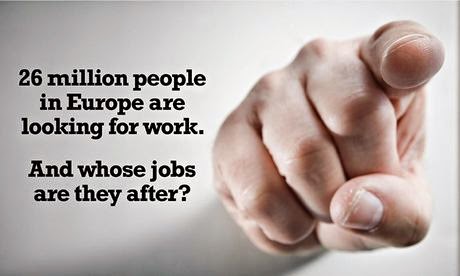 Fear.
Fear that hunkers down,
and feeds the lie:
creating bile,
creating scapegoats,
and further fear.

'They' are [apparently] coming.
And 'they' are out to get you -
swarming in,
like locusts,
ready to ravage
all the goodness from the land;
to bleed the nation dry.

This is the narrative.
A narrative of misinformation,
of hate,
of vitriol and prejudice.
A narrative that often misses the nuances
between 'immigrant' and 'asylum seeker'.
A narrative lacking in generosity,
hospitality, or welcome.
A narrative of dehumanisation,
and deflection:
easier to cynically target 'them'
than to examine one's own systems and structures
with something resembling integrity.
All smoke and mirrors:
smelling of a desperation
that comes of empty policies
and power just for power's sake.

As I ponder my options in the upcoming General Election,
the negative campaigning being used by the major
parties - and the appalling UKIP - is both horrifying and sickening.
It is one thing to practise the usual whinge and whine of:
'he said/ she said/ they smell/ they're mean and will take your toys away.'
It's quite another to deliberately target groups of people
and blame them for all that ails the land.
Ah, and that's another narrative:
the narrative that everything in the UK
has all gone horribly, horribly
wrong.
It has, if perhaps you are still wanting to be an empire,
or you fear a loss of class, gender, or race privilege.
But actually, the UK is a pretty decent place,
where, for the most part, there are decent, ordinary folk
getting on with one another,
and living decent, ordinary lives.
And occasionally even decent, extraordinary lives. 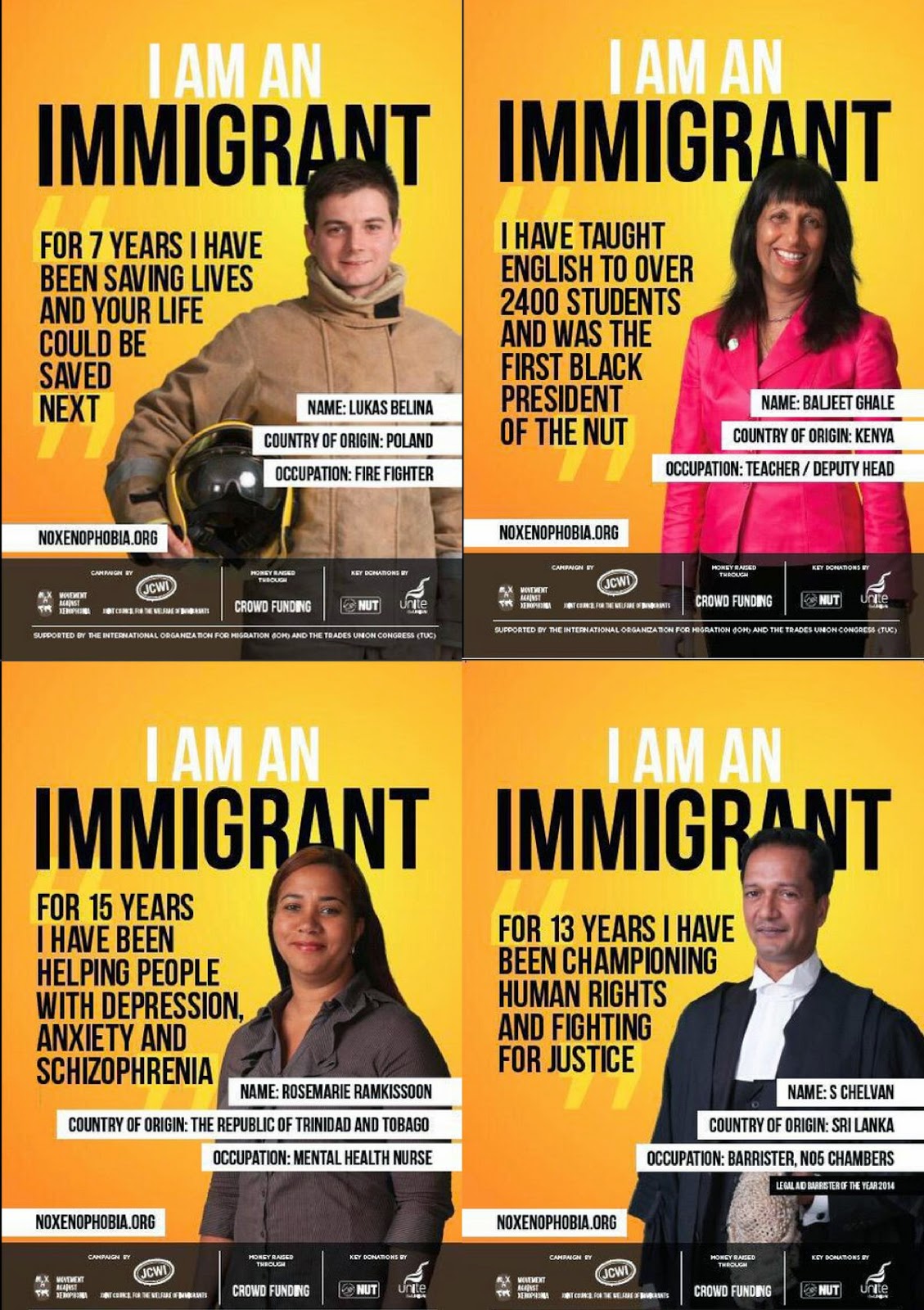 Some of those decent folk are trying to combat
the fear and the scapegoating.
The campaign ads I was looking for are
under the working title of:
'I am an immigrant'
The posters show different people -
all immigrants,
all with positive messages.
Human faces put on an issue,
attempting to combat a policy of
progressive dehumanisation.
Human beings demonstrating the value
that they bring to society,
showing how they contribute to UK society.
While I'm broadly in favour of any attempt to address
the negative narrative around immigrants -
because, bluntly, I'm an immigrant myself -
there's one slight niggle with the campaign.
It centres around this notion of 'worth' and 'value' and
'making a contribution'.
It's an important point to make, countering as it does
the lie that all immigrants are on the scrounge,
out to take, take, take.
But there's this:
it's also important to make the point that those
who are vulnerable, fleeing for their lives,
who may have lost everyone and everything they value,
are also welcome.
It's important because it counters a culture of hostility
with one of hospitality;
it counters a culture of clinging on to every little thing
with one of generosity.
It is counter-cultural because it has at its core
a deep and broad understanding of what it is to love one's neighbour:
'for I was hungry and you gave me food,
I was thirsty and you gave me something to drink,
I was a stranger and you welcomed me,
I was naked and you gave me clothing,
I was sick and you took care of me,
I was in prison and you visited me'  Matt.25:35-36

It's important because it recognises the innate worth
of each human being - a worth that transcends the financial
and recognises that, in the face of the immigrant,
there, too, is the image of God.
Posted by Nik at 23:55
Labels: ALL are welcome, general reflections, peace justice and politics

It makes me wonder WHO are the people really saying these things? I don't actually know anyone who is against immigration, and certainly not in these terrible terms. The government isn't because they see how our economy has improved through hard-working and often-temporary immigrants.
I suspect that some at least comes from social media: remember that apparently 'nice, middle-class housewife' who poured vile messages onto a public figure (and when uncovered,killed herself)? A mindlessness about such easy messages, a competitiveness to say something 'worse' ..how much of that lies behind these foul campaigns...
Like you, I am appalled. Like you, I have always believed this country was always a refuge for the refugees. I think it still is just that.
So let's find, and repost those welcoming posters, and make it clear we don't push refugee ships back out to sea,min any sense whatever...

Thanks for dropping by and reading the blog.
I'm wondering, too, who the people are that are really saying these things. I'd agree that there's a lot that gets whipped up in the cut and thrust of social media - and add to that the tabloid press.
But I'd respectfully disagree re. your comment 'the government isn't...'
The current party/ies in government, as part of their campaign to stay 'in' government, have precisely stepped up to the plate and are running on an anti-immigration platform.
The [alleged] opposition is also waving the anti-immigration flag as well. The main-stream parties appear to be doing anything to appease disaffected voters who may be thinking of moving across to UKIP. We both know where that party stands on the matter of immigration.
However, immigrants are not the only ones being scapegoated by the major parties.
Rather than addressing the matter of the economy and those companies not paying their fair share of tax, [or condemning the shoddy and exploitative practice of zero contract work hours, for that matter], or calling to account those particular individuals/companies in the financial sector who have managed to mess up the economy but feather their nests, it is easier to go for those who have no power.
We have a 'scrounger' narrative as well: the feckless homeless, the benefit scammers, etc.
This is also totally reprehensible.
Mr Cameron, in his previous election campaign talked of 'broken Britain'. I'd disagree. My own feeling is that it is Westminster that is broken. How do we fix that so that it becomes what it supposed to be:
the servant of the people - and more fully representative of us all?